The mission of RHHP is to provide a Christian community setting where persons of various cultures learn from each other, the surrounding neighborhood, and life in Baltimore city. We believe that people's lives are blessed by being part of faith communities.

Subscribe to the Reservoir Hill House of Peace blog

One again RHHP hosted its annual Thanksgiving potluck. About forty residents and friends shared in the festivities. Pastor Dave Greiser led the devotions and read from the Abraham Lincoln's 1863 Proclamation of Thanksgiving.
Posted by Chak at 7:48 PM No comments:

RHHP residents Remi and CJ participated in the Whitelock Farm Harvest Festival Greens Cook Off this past Saturday. Remi, defending champion from a couple of years ago in the non-vegetarian category, entered a dish of cabbage with peanut sauce (vegetarian) while CJ entered a dinosaur kale salad and a smoothie of strawberries, ginger, kale and other fruits. For a small fee, members of the public were allowed to sample all the entries and cast their votes.

When the popular votes were tallied, CJ's kale salad won second prize while Remi's entry won third prize in the vegetarian category. However, a panel of three judges selected Remi's entry as the overall best entry. For his effort, Remi was rewarded with a dinner for five at the Woodberry Kitchen. He will treat his wife and children when they join him in Baltimore. Well done CJ and Remi!


We had sewer water backing up into the basement yesterday afternoon. After deciding that professional help was necessary, we called Saffer Plumbing. George, a very nice plumber came to our rescue and snaked out the sewer line. The culprit turned out to be a small amount of roots but it appeared that the main cause of the backup was a paper towel. Looks like we need to mount a education campaign on the proper use of the plumbing system! The weekend emergency visit set us back a bit over $400 but we were able to resume our normal routines again. In addition to saving us from having to find relief elsewhere, George the plumber also regaled us with adventures in his professional life as a plumber. You can't imagine stuff he finds in clogged sewer lines!

We invited three neighbors for dinner last night and ended up with almost twenty guests. A bunch of our Rwandan and Congolese friends stopped by. Fortunately Remi had earlier cooked up three batches of Cameroonian delicacies for me and so we had plenty of food to share. The visitors also whipped up a bunch of fufu which made everyone fed and happy. 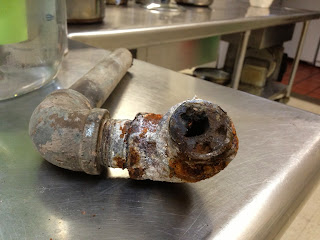 The plumbers from Brubaker Plumbing in Lancaster came down a few weeks ago to replace some pipes that were on the verge of rupturing. No more rust particles coming out of our kitchen sink! Despite all the plumbing work that have been done over the past few years, I am sad to say that there will be more work to be done.
Posted by Chak at 9:33 AM No comments:

Yesterday was a sad day in my commuting life. Isaac, who had been driving the #5 bus route for the past few months, will be reassigned to another route next week. In a city claiming the title of Charm City but not known for its customer service, he is a beacon of cheerfulness and courtesy. He drives carefully without the lurching starts that many drivers make. He always makes sure that the elderly are seated before pulling away from the curb. He greets his passengers with a kind word. It is great way to start the commute.

Each morning, he greets all his passengers with a cheerful smile. He often waits an extra 30 seconds when he sees a passenger hurrying to the bus stop. When I am slow to get out the door, he will linger at the stop across from our house for an extra few seconds to see if I will come charging out the back door! Since I was out of town until Thursday, yesterday was my first day this week to take the bus. He actually was happy to see me and told me he was glad that we had a chance to say goodbye! He said that he had been honking his horn to make sure that I was not missing my ride. (Another regular on the bus attested to that.) When I arrived at my regular stop, we shook hands,wished each other the best and parted ways.

I will miss him. but knowing that he is around spreading his good cheer makes me feel a little better about this city. I hope we get another driver like him.
Posted by Chak at 2:10 PM No comments:

One way to be the salt of the earth...

The following is an interesting piece in last Sunday's (June 16) NY Times. The author concludes that our behavior is malleable and susceptible to environmental influence to the extent that we can behave differently as we move from one neighborhood to another. He sounded ambivalent about that. Perhaps it further shows how easily we can be manipulated. He should already know that since he teaches marketing!

As a Christian living in Reservoir Hill, the author's conclusion elevates, albeit by a few notches, my optimism about being able to improve our block if not the neighborhood. At times, picking up litter and sweeping up broken glass on the sidewalk outside our house feels like a futile attempt to push back the tide but I think that there have been improvement. The idea that changing the environment can bring about change in human behavior suggests a practical (and servant-like) way we can live out the Gospel command to be the salt that flavors the earth - being change agents by changing the environmental cues! 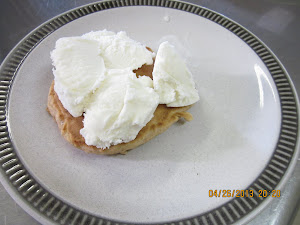 Got pancake but no syrup? no problem. A couple of scoops of vanilla ice cream will do the trick. 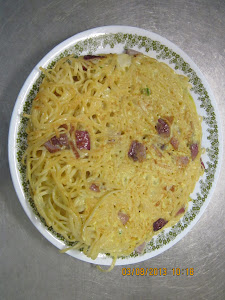 This is an omelette made with spaghetti and sauteed onion. According to Remi this is a staple of students in Cameroon. Cameroon ramen? 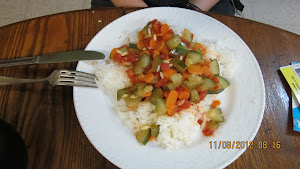 This is Nicole's first attempt at a stir fry of cucumber, and tomatoes 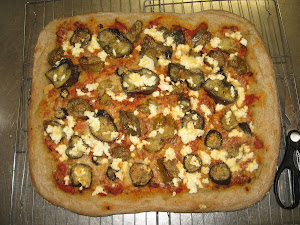 Eggplant from our garden, the crust is whole wheat with blended lentils 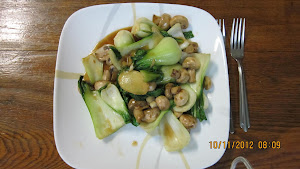 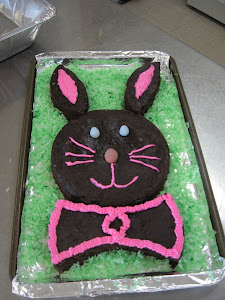 made with black beans, no eggs and no oil! This stuff is actually good for you.... 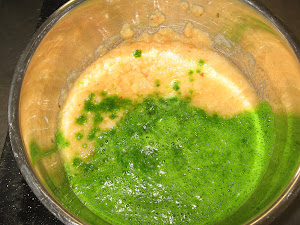 this is a blend of onions, ginger root, tomatos and herbs. It serves as a base of various bean and meat stews. The green part is blended Italian parsley 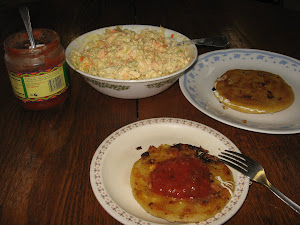 cheese pupusa and coleslaw with mayo 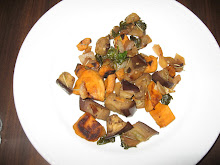 That's her own improvisation. 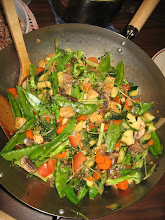 with help from Joseph and a generous splash of soy sauce.

Ancient secret recipe straight off the label of the can of pumpkin. Delicious and relatively low fat. 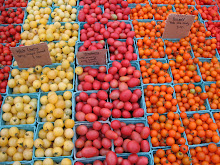 There are tomatoes I had never seen in Seattle. There were variegated ones that came in shades of orange and yellow.. 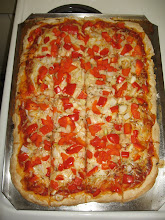 Sarah was hungry and decided to make a quick pizza with a mix.

I wonder how they arranged the nuts along the side. It is mostly almond and walnuts inside. It makes the old regain their youth. 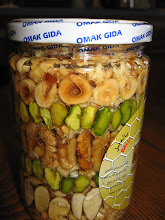 We found this in a market in Highland Town, a diverse East Baltimore neighborhood. It is from Turkey.

Food from the old country imported from Africa. I sampled one. It had a crunchy casing but chewy on the inside. 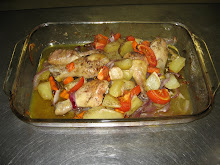 He made a dish of chicken, tomatoes, potatoes and onion. He was very proud of it. 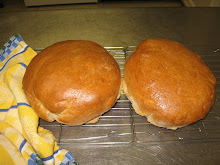 One of the pleasures of living in RHHP is to witness how many of the asylum seekers learn new skills to adapt to life in America without their wives or cooks. Michael is a doctor and public health professional from Ethiopia and this is his first attempt at baking which turned out very well. 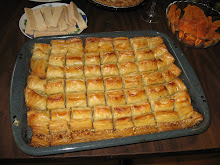 A visitor from Turkey brought this tray of delicious (and sticky) baclava to a potluck.

Unknown dish at a potluck in RHHP

We are often blessed by a variety of foods that guests bring to our potluck dinners.

Hassan, former RHHP asylee, also known to us as the maker of yellow food, is shown here with his typical Iraqi (his version) dinner of fried fish, salad dressed with lemon juice and, flat bread and water melon. He usually marinates his meats and fish with tumeric and hence gained the reputation for making yellow food. 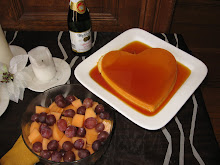 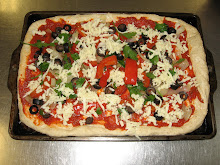 Ellen made this with cheese made without enzymes. Hassan's son, Fawzi, visited us for dinner. Hassan was a former asylum seeker who lived here but is now with his family in Syria. 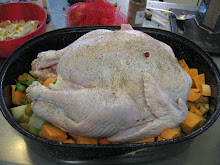 This is the recipe demonstrated on NYTimes.com by Mark Bittman (the Minimalist) but did not work out as planned. It took more like two hour but it was still faster than the convention method which in this case would have taken four of five hours (15 pounder). This one, by the way, was the backup turkey. I cooked another 15 pounder the conventional way.

Clever use of ingredients - pizza on a tortilla, frequent dinner for some residents 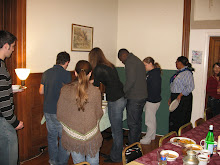 Potlucks are an important part of the RHHP community life

The kitchen is often the hub of community life in RHHP 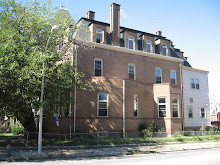 another view
The Mission of RHHP reflects that of the North Baltimore Mennonite Church, which is to share Christ’s reconciling love with our communities and the world. The RHHP provides a Christian setting where persons can live together, serving and learning from the surrounding neighborhood and Baltimore city through non-profit agencies, churches and daily living. We believe that people's lives are blessed by being part of faith communities. 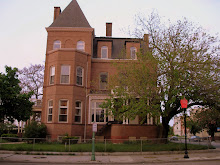 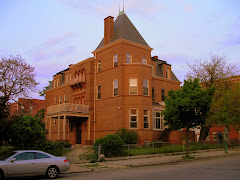